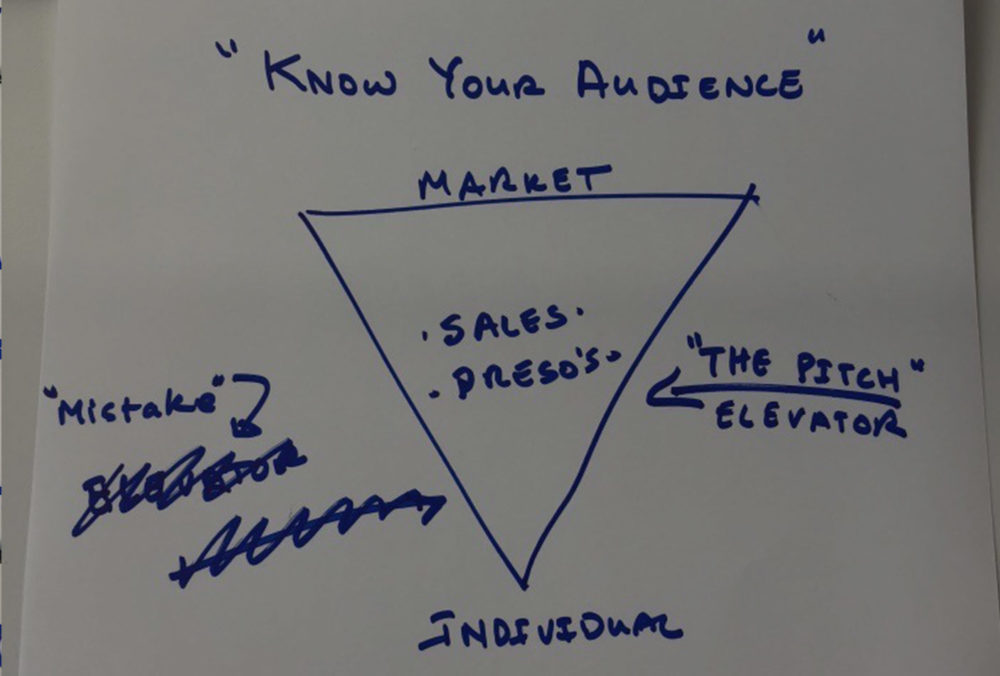 I’m a big believer in Gall’s Law. Many of you are familiar with it, no doubt, but for those who are not, here it is:

All of that to say, I like keeping things simple — and like Gall, I believe that most really complicated things can probably be broken down into their purer and simpler essence. Such is certainly the case with pitches and presentations. You’ll find a lot of convoluted systems for building the perfect sales pitch, but I believe you can boil it all down to just a few very simple premises.

The big-picture view? You need to think of your pitch in terms of the story you’re telling. That’s the point I’m building up to. But before we can consider story, we first need to understand just a few basic storytelling mechanics. That’s what I’ll be outlining in this five-part blog series. Again, these points are all simple, and they will build toward some final considerations of story.

Today’s topic, however, is knowing your audience. That’s the first and foremost point in developing a pitch. And you’ll notice that I said audience — not market. I was recently in a pitch meeting with a tech startup, and the question was asked: To whom are you trying to sell this product? The answer given: Everyone! But of course, that’s no answer at all. Everyone is not an audience. An audience has to be more specific than that.

Here’s an analogy I’ll make. Say you’re a musician, and you go out on stage and start playing funk tunes. There’s just one problem: The audience was promised jazz, and that’s what they’re expecting. There is likely to be a lot of frustration and disappointment, regardless of how good you are. That’s because your performance wasn’t made to fit the audience.

Likewise, any sales pitch can fall flat when it’s made to the wrong audience

and that means your pitch has to be, in some sense, exclusionary. It can’t be for everyone. It has to be for a specified group.

Consider the example of Facebook. Sure, it’s ubiquitous now, but when Facebook was first launched, it was only available to Harvard students. Products don’t get much more exclusive than that. By focusing on a specific audience, Facebook was able to cater their product to the audience very precisely, and then expand it gradually. By the time Facebook was open to the general public, it had been fine-tuned. It was a better, more sophisticated offering.

Something similar happened when we launched iTunes. Today, it’s a popular program among Mac and Windows users alike. At the time, though, it was only made available on Apple computers. Why? Because we knew our audience, and knew the extent to which they would bear with bumps in the road. We had their patience and their enthusiasm as we developed the product, and once we were ready to put it out there for Windows users, it was a much more streamlined and efficient program.

Knowing your audience doesn’t mean knowing the market — again, that “we’re selling to everyone” mentality — but neither does it mean honing in on the individual. That’s too specific for what we’re talking about here. To know your audience, you need to know the basic values and pain points of the people who will be making the purchasing decisions with regard to your product — so how do you do that?

I would argue that you apply story — which means you’ll have to hang in there for the remainder of this blog series. Basically, though, you need a story you can write down, a story you can play in your head over and over again, because it’s only through that deep understanding of story that you’ll get a clear idea of who your audience is: Who reacts to that story, who doesn’t.

If you don’t know your audience, then you really are trying to sell to everyone — and most of the time, that means you’re selling to nobody. That’s my point for today. In part two, we’ll talk about how your sense of audience informs the language that you use — another key mechanic to master as you think about your pitch; your story.